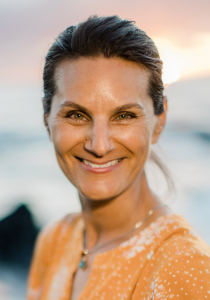 Rukhsanna Guidroz was born in Manchester, England. With a Persian-Indian father and a Chinese mother, Rukhsanna was always drawn to traveling to faraway places. After studying French at King’s College, London, and political science at the Sorbonne, Paris, she left for the steamy shores of Hong Kong. There, she worked as a reporter for the Hong Kong Standard daily newspaper and later as a producer of the current affairs show “Hong Kong Today” for RTHK’s Radio 3. She also wrote features for in-flight magazines for China Airlines, Qantas, and Emirates.

A windsurfing trip to the Hawaiian Islands changed the course of Rukhsanna’s life. Swept away by the sheer beauty, relaxed lifestyle, and warm climate of the islands, she decided to make Maui her home.  After becoming a mother, Rukhsanna began her teaching career. She particularly enjoys encouraging her students, kindergarteners, or high schoolers to write from a place deep within themselves where creativity has no limits.

In 2005, Rukhsanna was introduced to meditation and intuitive practices. Both have allowed her to develop her personal growth and her daily writing. Inspired by life experiences in Europe, Asia, and now Hawaii, Rukhsanna has many stories she’d like to share.