Please join us to celebrate this year’s winners of the South Asia Book Award. In honor of the authors and their winning books, we are hosting two events – an educator workshop with the authors, and a public facing author talk & book signing. Read more and register below!

Are you a current K-12 educator trying to find books focused on South Asia and South Asians living abroad? Are you looking for ways to connect your classroom readings to living authors? Join us for the 2022 South Asia Book Award Educator Workshop and Award Luncheon on Saturday, November 12, in Madison. Educators will have the opportunity to meet this year’s honored authors and collaborate on lesson development surrounding the award books and South Asia. The first 10 educators to sign up will receive a bundle of the 3 winning books! For more event details and to register, please click here. 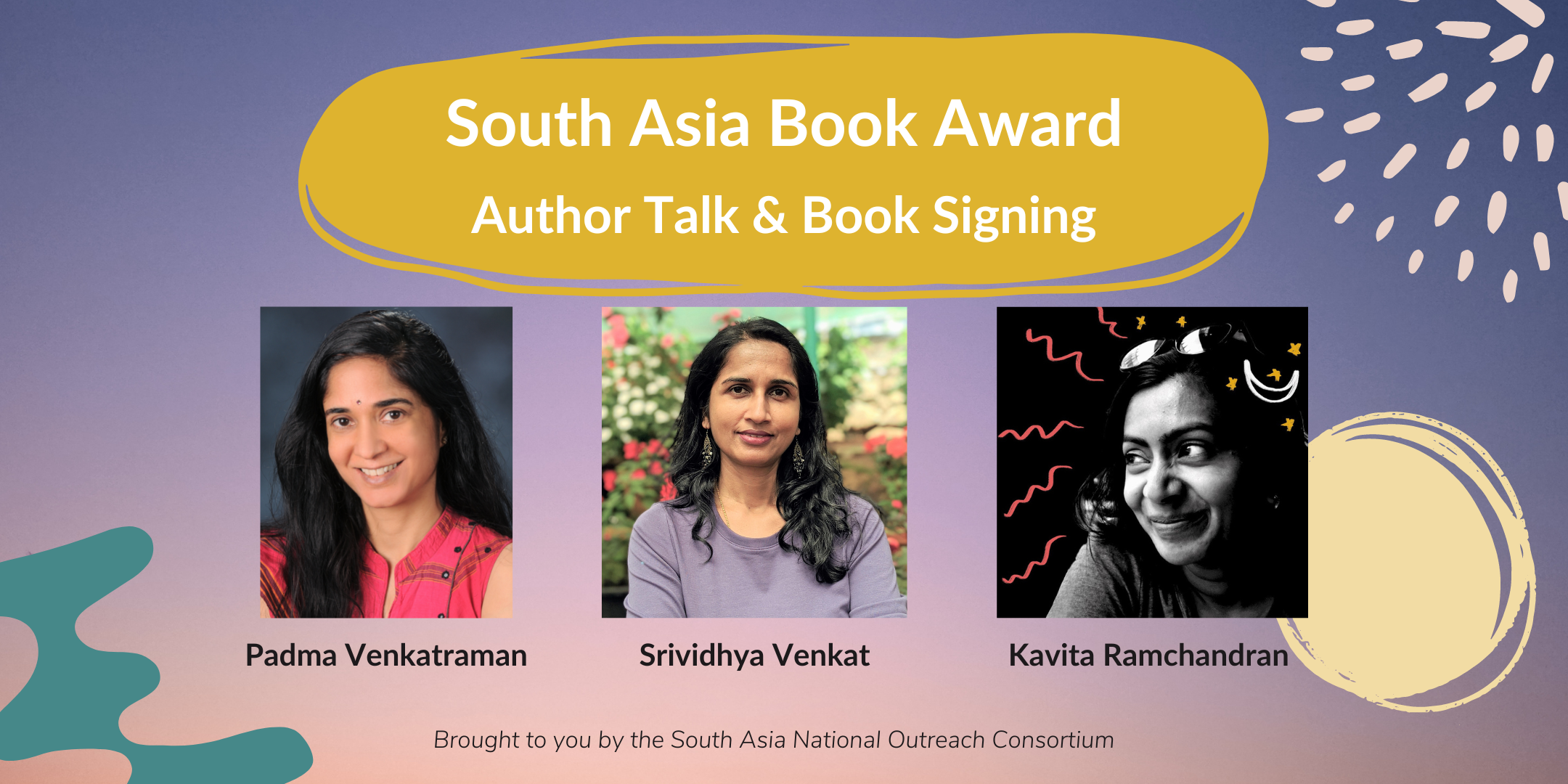 Winners of the 2022 South Asia Book Award will be on hand to discuss the creation of their stories, read excerpts, and sign copies of their award-winning children’s books! Join us at the Madison Library – Central Branch on Saturday, November 12, 2022, 3:00-4:30 PM. This event is open to the public; educators, parents, and children are especially encouraged to join!

Copies of award books will be available for on-site purchase courtesy of A Room of One’s Own. For more event details and to register, click here.

Dancing in Thatha’s Footsteps is written by Srividhya Venkat and illustrated by Kavita Ramchandran, for ages 4-6, and winner of the SABA Award for Young Readers.

“This book’s charming protagonist and believable plot provide a wonderful opening for conversations about the dangers of strict gender constructs.” Kirkus Reviews

A heartwarming picture book about a multigenerational Tamil-American family discovering a shared love for bharatanatyam, an ancient classical dance form that continues to fascinate young dancers across the globe.

Thatha takes his granddaughter Varsha to weekly bharatanatyam classical dance lessons while her brother, Varun, tags along. Unexpectedly, the rhythm draws Varun in, but amid spirit crushing comments he’s uncertain that dance is for boys until Thatha shows his dance moves and reveals his past as a dancer in India.

Born Behind Bars is written by Padma Venkatraman, for ages 10-14, and winner of the SABA Award for Middle Grade Readers.

“Venkatraman has never met a heavy theme she did not like….Borrowing elements of fable, it’s told with a recurring sense of awe by a boy whom the world, for most of his life, has existed only in stories.”—New York Times Book Review

The author of the award-winning The Bridge Home brings readers another gripping novel set in Chennai, India, featuring a boy who’s unexpectedly released into the world after spending his whole life in jail with his mom.

Kabir has been in jail since the day he was born, because his mom is serving time for a crime she didn’t commit. He’s never met his dad, so the only family he’s got are their cellmates, and the only place he feels the least bit free is in the classroom, where his kind teacher regales him with stories of the wonders of the outside world. Then one day a new warden arrives and announces Kabir is too old to stay. He gets handed over to a long-lost “uncle” who unfortunately turns out to be a fraud, and intends to sell Kabir. So Kabir does the only thing he can–run away as fast as his legs will take him. How does a boy with nowhere to go and no connections make his way? Fortunately, he befriends Rani, another street kid, and she takes him under her wing. But plotting their next move is hard–and fraught with danger–in a world that cares little for homeless, low caste children. This is not the world Kabir dreamed of–but he’s discovered he’s not the type to give up. Kabir is ready to show the world that he–and his mother–deserve a place in it. 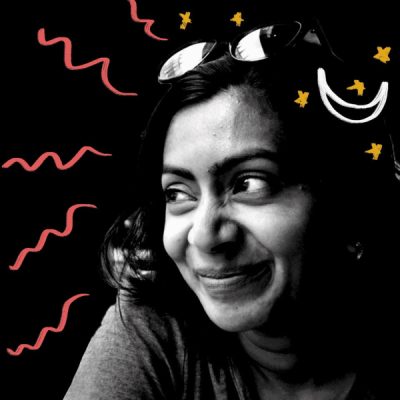 Kavita Ramchandran is an illustrator and graphic designer based in New York City, though she is originally from Mumbai, India. Over the past decade she has art directed children’s magazines, designed elementary-school text books, illustrated the award winning app HangART and is creator of the animated shorts – MAYA THE INDIAN PRINCESS and HAPPY HOLI MAYA! for Nick Jr. She made her debut as a picture book illustrator with DANCING IN THATHA’S FOOTSTEPS (winner of the 2022 South Asia Book Award), and is currently working on a few more. Her upcoming non-fiction picture book A IS FOR ASIAN AMERICAN, (Haymarket Books) is scheduled to be published in Summer 2023. She works across media, both traditional and digital, and is known for her profligate use of color. 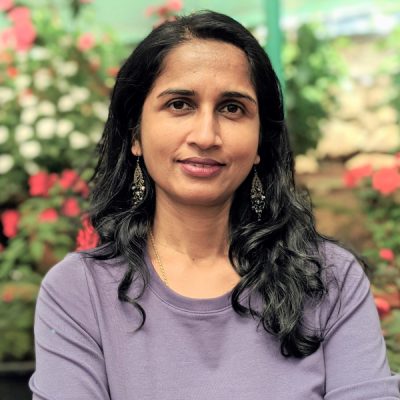 Srividhya Venkat has published several picture books, including DANCING IN THATHA’S FOOTSTEPS (winner of the 2022 South Asia Book Award) and THE CLEVER TAILOR (a 2020 South Asia Book Award Highly Commended Book). Having grown up in India and lived across three countries, Srividhya loves stories that are unique, yet universal. When not reading or writing, she loves to listen to music, tinker with new recipes and explore the world outside her window. She now resides in the Chicago area with her family. 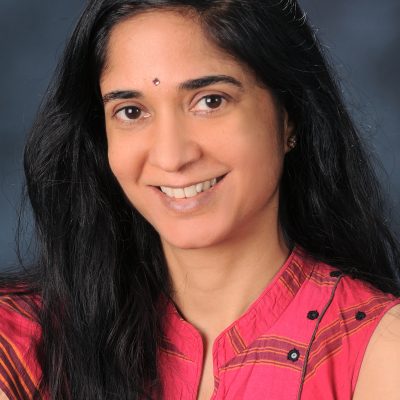 Padma Venkatraman is the acclaimed American author of BORN BEHIND BARS, THE BRIDGE HOME, A TIME TO DANCE, ISLAND’S END and CLIMBING THE STAIRS. Her books have won numerous honors and awards (e.g. WNDB Walter Dean Myers Award, Golden Kite Award, South Asia Book Award, ALA Notable etc). She has a doctorate in oceanography and has spent time underwater, on ships where she was the only BIPOC female and the chief scientist, served as diversity director, and teacher. She was born in India, has lived on 5 different continents, and now calls Rhode Island home.